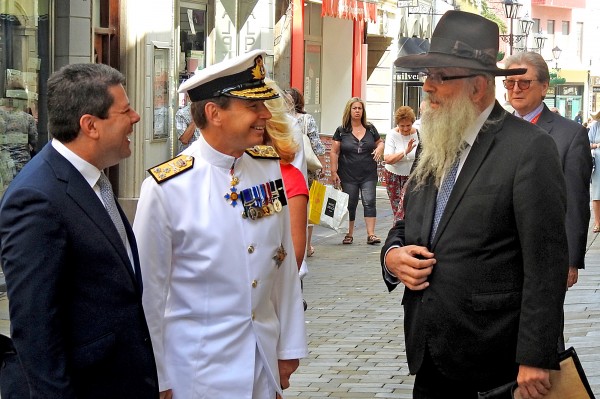 Gibraltar’s new governor was formally sworn in at the Gibraltar Parliament on June 11th 2020. Normally this is a high profile event with a guard of honour, with residents lining the street outside and a packed crowd in the public gallery along with a flurry of photographers. Sadly Sir David Steel missed out on much of that part of his welcome due to the covid19 crisis.

He was, however, warmly welcomed by the Chief Minister, Fabian Picardo and the Leader of the Opposition Keith Azzopardi who both spoke at length.

Sir David is a naval man, having joined the Royal Navy in 1979 and later spent some time on HMS Invincible,

In his welcome, Fabian Picardo, the Chief Minister said:

"You will know this from your forays here in the Royal Navy, the senior service, which first identified the strategic significance of the Rock that the Romans had called the non plus ultra. It was the Navy that identified that beyond our straits, no one could pass without Britain's knowledge if they held Jebel Tariq. For this British place is one that you will find is very different to other British places. You will find that we are not English and this is not England. It may sound obvious to you and to the many hearing me today, but it is not as obvious to everyone as it should be. We are not Scottish, nor Irish nor Welsh. We are Gibraltarian in our style and form, the people of the rock. And we are not better because we are Gibraltarian, but we are certainly also not worse. We are just different. British but different as different as each of the British people of the great British family of nations but no less British as a result. But bound by history, custom and constitution into a British way of being and of course, we are British in our own way, in our own style, with our own laws. And those laws and that constitution are the key to your important but well and tightly defined role."

“In Gibraltar we treasure our historic links with the British Navy. We have a long joint history in this part of the western Mediterranean. We are therefore glad to see someone from a maritime background once again in post. As a man of the services you are schooled in conflict. Our people have also, for many years, evolved against a backdrop of political and military conflict.
Sunday is the 38th anniversary of the end of the Falklands War – a people who we feel a kinship with because of their own struggle for self-determination. As someone who served in the Falklands War you will appreciate that more than most.”

In addition to his naval experience, Sir David has also qualified as a lawyer, and is also a Master of the Bench at the Honourable Society of the Middle Temple - one of four Inns of Court in England and Wales.

In his speech, Sir David mentioned that early on in his naval career he went to see the engine room of his ship during an exercise and asked what he could do to help and it was suggested he sat quietly in the corner and watched.

He also referred to a quote by Sir Winston Churchill that “A nation that forgets its past has no future”. He clearly understands that Gibraltar has a history which was outlined in the Chief Minister’s speech, and values it.

The comment is highly appropriate in a week where in the UK people who have no understanding of the life of Churchill vandalised his statue.

Having been sworn in by the Chief justice and welcomed to Gibraltar, Sir David took a stroll down Main Street from the Parliament to his new home at the Convent. On the way he talked to a number of people, including the Chief Rabbi Ron Hassid. On entering the Convent he thanked the press photographers busily taking pictures of him.

It will be interesting how, given his Naval and legal experience, he handles the response to regular irritating illegal incursions into British Gibraltar Territorial Waters.